Too much has happened in the past year for me to catch you up on all of it here. Suffice to say we are in LA, the kids are busy, we are busy, I now own a book business...

(It was easier than having another baby.)

Have a most excellent summer!
Posted by LA Mama at 10:01 AM 1 comment:

Sometimes my plan for world domination my family works out.

I gave a pep talk. I told the two younger ones they would ride in the cart and talked about expectations. I promised a treat if they were all good.

In the end the trip went really well. The icing on the cake was coming home, unloading the van, and not doing it alone. The kids started taking stuff inside. They came back outside and took more stuff inside. This happened a couple more times (it was one of those trips where I realized we were out of just about everything!), and by the time I had the last two items in hand, had locked the van, and was walking inside, I realized how efficiently we had worked. More important, we had worked *together* and without any complaining.

At the end of what had become a very long day, I felt as if through all of the chaos and craziness that surrounds our life here, sometimes we are succeeding at making this family thing work.
Posted by LA Mama at 10:15 PM 1 comment:

Today on the way to take one of the children to a very low-key yoga class (yes, I know), I came upon a unicyclist crossing in front of me as I was waiting to turn west onto Venice Boulevard.

There was also a man peddling random things in the same intersection. Oh, and multiple bikes as well as the multiple lanes of car traffic in every direction.

After I dropped off said child, I wanted to go to Whole Foods just to wander around. I don't know if I'm the only person who does this or not, but I like to browse at WF. There are very few things I can't find anywhere else (AND FOR CHEAPER), but I like to look... and people watch. After all, this is the WF in Venice, about which the Whole Foods Parking Lot song was created a couple years ago.

Instead of WF, however, I ended up at a local non-dairy ice cream shop that I had never noticed before. They make coconut cream ice cream, sweetened only with raw honey and then mixed with (your choice of) strawberry puree, mint, cocoa, etc. I chose strawberry and was not disappointed. Still, it was kind of a weird space. There were only a couple tables, and one already had more than five (but I think fewer than ten) yoga instructors seated around it.

I had my phone but hadn't thought to bring any other reading material, so I found myself reading one of the yoga magazines while I ate my (non-dairy) ice cream. Sometimes the yoga magazines (there is at least one that is always available at our library, so I have read it before) don't appeal to me at all because they can be very woo-woo, but this particular issue actually had some health/diet-related articles, so I enjoyed that.

As I sat there I realized that even if I don't feel like I live LA, LA lives LA all around me... and sometimes we intersect and find common ground.
Posted by LA Mama at 10:30 PM No comments:

When I was a child I assumed that time represented a linear progression of events and that most memories of most people and places from childhood, especially those without later contact or context, would become fuzzier with time.

The longer I live the more I realize time is not a line in space, but truly a circle, a cycle of memories. Just this past week I have been reminded of a time in my life knowing people I haven't seen in many years. One of those people died this week, only a few hours after I spoke with another person from this time period in my life.

We are not so detached from "then" as we think we are. Perhaps "then" is simply a different shade of "now." We know this is the way God reckons time--a day is as a thousand years and all of that--and sometimes I believe we get a glimpse of it in some small way. After all, if we did not have memory, time would truly be a progression of random events, one after the other with no connection between or reference back.

Instead, we have the gift of memory, of cycle, of repetition. We have the gift of contact, of feeling someone else's life touch ours as our respective lives become interwoven into each other as we all follow separate and sometimes disparate paths on our roads through life. What looked like a line graph or road map when I was a child looks more like a tapestry today.
Posted by LA Mama at 7:45 PM No comments:

Stark and to the point, which was the point. 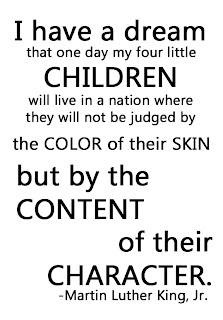 If you pin, please make sure you pin back to this blog.  Thanks.
Posted by LA Mama at 8:00 PM No comments:

Everyone says I need to have some of this.

No one really knows how I can get it.

It is elusive and must be stolen?

Please read this post and then follow this blog. I love Mrs. Ward's writing.
Posted by LA Mama at 9:12 AM No comments: